The green gold – from research to practice

This fall Denmark's first farm for biorefining of grass was inaugurated at Ausumgaard. Among the guests present was the former Minister of Food, Agriculture and Fisheries Mogens Jensen, and in his opening speech he emphasized how grass is one of the sustainable, locally produced alternative protein sources, which could help reduce the amounts of imported soya - but how did the green adventure really start?

"It is powerful that we have research and development environments that can work together and make research a practical project," said Martin Merrild from Agriculture & Food (Landbrug & Fødevarer), who was also present at the inauguration of the grass protein plant at Ausumgaard. And exactly cooperation was one of the words that recurred in all the opening speeches.

Behind the project are Vestjyllands Andel, Ausumgaard, SEGES and R&D Engineering & Automation, who aims at developing a plant concept for locally Danish-produced grass protein as an alternative to imported soya protein and thus contribute to a more environmentally and climate-friendly agriculture.

How did it all start?

Consultant Erik Fog from SEGES, who is one of the partners in the new plant, says that there is a pool of projects involved in the research, that forms the basis for the project at Ausumgaard, which focuses on organic grass protein.

The first sod was cut in 2014 with the Organic RDD project "OrganoFinery", which dealt with biorefining of green crops for protein feed tested on chickens. In parallel, the project MultiPlant ran, which focused on the potential of perennial high-value crops for locally produced organic protein feed. Later, the project followed SuperGrassPork, which investigated and tested whether pigs would eat and grow on organic grass protein feed. The three projects were funded by the Organic RDD program, funded by GUDP and coordinated by ICROFS. Ten other GUDP-funded projects have played a major role in the breakthrough and development of Green Biorefining.

Erik Fog adds that we have to go all the way back to approx. 2011, where Mette Lübeck from Aalborg University and Pauli Kiel from the company Biotest came up with the idea of ??souring the grass juice and thus extracting the protein - an idea they documented in the project, BIOREF. In 2012, Erik Fog got in touch with the two researchers, and together they took the initiative to continue with the research with an organic aim and applied for funding from GUDP/ICROFS.

Grass protein in a large scale

The first experiences with extraction of grass protein on a large scale were made in 2016 at a test plant at Nybro Tørreri, which has extensive experience in handling grass products for drying and was able to obtain large quantities of organic clover grass from Sønderhøjgaard. The large-scale experiment came about in a good collaboration between Aarhus and Aalborg University through the projects BioValue and OrganoFinery and became the basis for several feeding experiments. It had now been shown that the process could be scaled up and that the protein concentrate worked well in laying feed (OrganoFinery) while the grass fibers in the press residue could replace grass silage for dairy cows (BioValue). "We verified that it could be done - a very decisive step, but we needed to test the slaughter pigs, which compose a large part of the sales", says Erik Fog and this laid the groundwork for the project "SuperGrassPork", which Vestjyllands Andel also chose to be a part of.

As part of the project SuperGrassPork an important technical research development ran, which studied conditions on how quickly the grass should be treated after it has been cut - and how long lactic acid fermented grass concentrate can last. "There are a lot of factors that have been investigated in those projects", says Erik Fog and adds "it is quite fantastic how the various parties involved come together and pull this forward".

When research and practice go hand in hand 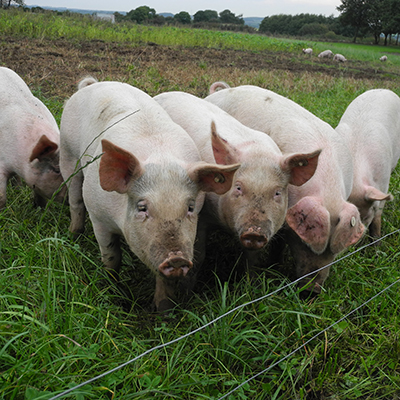 Erik Fog says that the research is crucial for us to have come this far with the grass protein: "A very clear example is the feeding experiment with pigs in SuperGrassPork. When it became clear that the pigs grew just as well on grass protein as on soya protein, and that it also did not change the meat quality, it became meaningful for Vestjyllands Andel to move forward with the next project, which has now established the grass protein plant at Ausumgaard".

Vestjyllands Andels' director, Steen Bitsch, says that it is important to think far into the future: "We do not know what future we see in relation to soya imports from China, so it is important that we can become self-sufficient. The business case must of course add up, but even though it is difficult to see the financial incentive right now, it is our duty to take part in the project. At the same time, I am often contacted by many young people who look in the direction of agriculture - we must also attract young people with new sustainable initiatives".

The adventure has only just begun

The green adventure has only just begun even though the technique is old. Erik Fog says that there is a plant on Falster that was used 20-30 years ago. The plant made lucerne concentrate in the same way we do today. But why did we stop using it? And why are we moving on with it now? Erik Fog believes that the explanation must be found in economic development and later in rapid industrial development; "Organic soya protein is very expensive; twice as expensive as conventional soya, and therefore there is a great economic incentive for organic farmers to find alternatives. The grass protein price is still too high compared to the conventional soya price, hence it requires more development before it can also be used conventionally - for instance, other value-creating products must be extracted from the residual products. The protein concentrate itself makes up about 3% of the total grass weight that has been driven into the biorefinery - so it is extremely important that value is also created from the residual products"(for example fiber and brown juice)

The Ausumgaard plant has a very simple solution for utilizing the residual products, as you put it all in a biogas plant. But other possibilities are also being researched; for example to utilize the fibers for textiles, to extract lactic acid from the residual juice or to utilize the sugar content of the brown juice as a fermentation basis for new processes depending on the process technique.

Uffe Jørgensen, center manager at CBIO, AU (Center for Circular Bioeconomy, Foulum) says that a very significant value creation is the very positive influence of grass and clover cultivation on the effects of agriculture on climate and environment: "Compared to the cultivation of cereals, rapeseed or maize, nitrate leaching by grass cultivation is halved. Pesticide consumption in conventional grass cultivation is 40 times less than the average for other conventional crops. Greenhouse gas emissions are reduced correspondingly by 0.5-3.5 tonnes Co2/ha/year. Together with the exciting new product options, we have an incoming home run, as Mogens Jensen called it in his opening speech". 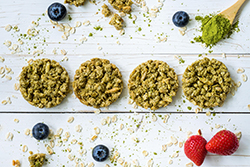 Read more about grass protein as a food:

On Friday 4 September 2020, Minister of Food, Agriculture and Fisheries Mogens Jensen inaugurated the first full-scale commercial plant for biorefining grass at Ausumgaard near Holstebro. The plant has been established as part of the project, TailorGrass, which GUDP has supported with DKK 14 million.