Proteins extracted from organic green crops have potential to substitute imported protein feed. In the organic RDD project OrganoFinery, the first small-scale tests to extract proteins from red clover and clover grass using a novel method showed good results, especially with respect to a favorable amino acid composition. The plan is to develop a feed product, containing organic red clover protein extract and test it in feeding experiments in poultry.

Organic farmers with monogastric animals (poultry, pigs and fish) are facing a number of challenges. The most serious are:

Due to these challenges the organic farmers have to import feed and use manure from conventional farms. The over all target of the organic RDD project OrganoFinery is to provide solutions to these problems by developing a green biorefinery where the organic crops are at the same time used for animal feed, fertilizer and energy production (methane).

One of the project´s aims is to identify crops suitable for organic arable farms with a general need for nitrogen. Sufficient nitrogen supply is essential for the production of protein, and therefor particularly legumes or mixed cropping with legumes are interesting for organic farmers as these crops accumulate nitrogen by biological nitrogen fixation. These crops are able to produce large amounts of protein, even when there is a low level of nitrogen in the soil and no use of fertilizers. Additionally, the legumes have a positive effect by contributing to the nitrogen supply to subsequent crops and they have an important role to play in the crop rotation. Red clover has been chosen as a model crop in OrganoFinery, but also clover grass, alfalfa and oil seed radish are being studied.

The first trials were carried out this summer in small-scale experiments on freshly harvested red clover and clover grass. Immediately after the harvest the biomasses of both crops were mechanically separated in a green juice and a press cake using a screw press (Figure 1). Organic protein feed was produced by lactic acid fermentation of the green juice. The extraction of proteins was based on an already developed technique to extract proteins from alfalfa. The method for separation of proteins from alfalfa was developed by AAUs subcontractor Biotest Aps in a joint Biorefinery program, BIOREF (FØSU grant 2101-08-0041) (Kiel, P. 2012).  The alfalfa protein extraction method involved precipitation of the proteins with sulfuric acid, which in OrganoFinery is substituted with lactic acid fermentation in order to develop a process that is in accordance with organic principles. 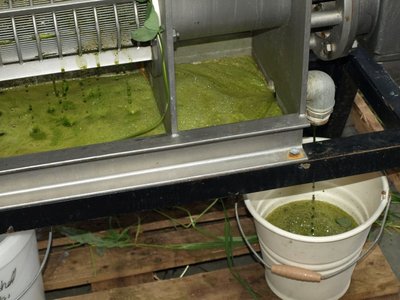 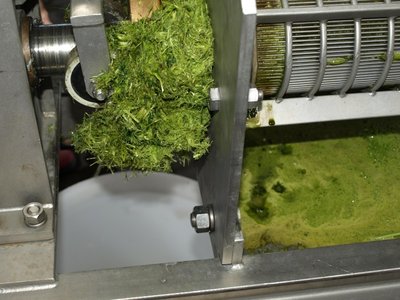 The result of the fermentation was two fractions:

The intention is now to analyze whether the brown juice can serve as both C- and N-source and thereby substitute manure in biogas processes. Moreover, the digestate produced in the anaerobic digestion will be evaluated as organic fertilizer for the crops.

Mette Lübeck is project manager of OrganoFinery and Associate Professor at Aalborg University, Beatriz Molinuevo-Salces is postdoc at Aalborg University. Erik Fog is advisor in Organic Farming at the Knowledge Centre for Agriculture. Pauli Kiel is director at Biotest Aps.

Read more about the results from OrganoFinery