Cover crops produce a post-harvest effect on weed control by moving nitrogen (N) to the topsoil. This enhances the N uptake of succeeding barley crop, especially at early stages, and limits the access of thistle to the subsoil N.

In Europe, the creeping thistle (C. arvense) has become a prominent perennial weed species and poses a high risk to crop productivity in many organic cropping systems. Under the organic crop production conditions of most European countries, the most effective method of perennial weed control is intensive autumn tillage after harvest of main crops via the repeated removal of aerial thistle shoots. However, this method does not lead to good nutrient management in organic farming. It prevents farmers from growing cover crops, and it causes nitrogen leaching, degrades soil structure and soil biological activities.

In stockless farming systems, more legumes are needed to supply the necessary N in the future organic crop production in Europe as access to animal manure is limited and the use of animal manure from conventional farms is increasingly restricted.

Legume-based cover crops are a common practice in organic farming and can provide a substantial amount of N to the following crops. Furthermore, cover crops also play a role in weed management. The direct competitive effects of cover crops on weeds are well-known. However, no study has addressed the mechanism of cover crops on the N status of perennial weeds such as C. arvense during and after the cover crop has been grown.

Differences in rooting depth between barley and thistles differentiate the spatial and temporal distribution of soil N, which will benefit each of them. In the spring, the newly established barley plants have shallow roots and only take up inorganic N from the topsoil, while thistles already have a deep root system and can access the N available in subsoil layers. The maximum rooting depth of barley is around 1 m. The N below this depth cannot be accessed by spring barley anymore, but thistles can take it up. Therefore, it is necessary to bring back such deeply placed N to the topsoil thereby preventing nitrogen leaching as well as reducing nitrogen availability to the thistles.

Effect of cover crops on the fate of autumn topsoil N

In two-year experiments made within the ROWCROP project, we investigated the effect of cover crops on the fate of autumn topsoil-N, using 15N-labeled nitrogen as a tracer. This allowed us to measure the 15N-tracer in the plants and in the soil to investigate how the cover crops affected the availability of the nitrogen left over from one autumn to the barley and thistles growing in the next season. 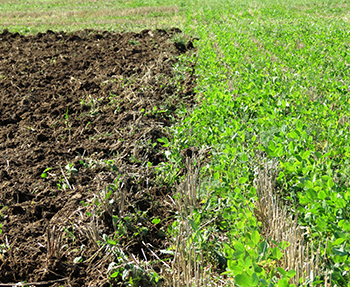 The 15N enrichment in barley leaves at tillering and heading of the cover crop treatments were about 2 to 3 times higher than those in the tilled treatment (Fig. 1), but no effect was seen at barley harvest (Fig. 2). Contrary, the thistle plants in the tilled treatment had 3 to 6 times more 15N-tracer than the thistles from the cover crop treatments (Fig. 2). The recovery of 15N in barley grain at harvest was not affected by cover crops as at this time the barley also developed deeper roots, which could uptake the leached 15N-tracer in the deeper soil layers within their root zone, but still the cover crops had increased N availability to barley during early growth, also increased its total N uptake, and reduced the N availability for the thistles. 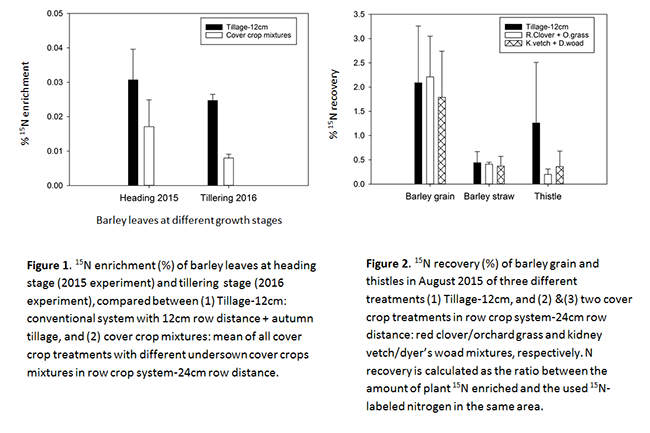 The results show that cover crops had a strong effect on the fate of the autumn topsoil N. Soil cultivation in autumn promoted the downward movement of N to the subsoil layers. The leached N available in subsoil layers in the following year would benefit for thistles, which already developed their root systems there.

Differently, the cover crops took up the autumn N and also reduced the water flow during the high precipitation period of autumn and winter. When the cover crops were incorporated in the following year, the N was returned to the topsoil. A mineralized proportion of this N was released in the topsoil and available for the uptake of the young barley crop rather than for thistles. Through these studies, we could show that with autumn soil tillage, the N from the autumn became primarily available to the thistles in the next season, whereas with autumn cover crops the availability of this N was shifted strongly from the thistles towards the barley crop.

In organic farming, the needs of effective weed control and nutrient management are the two main goals, and should not be  separated. In terms of weed control strategy, in practice intensive autumn soil tillage is needed in the fields with heavy infestations of C. arvense.

However, to achieve a long-term management of this weed and to meet the optimal N supply, more sustainable control strategies are needed, with the combination of different methods. Cover crops and management of their biomass producing both direct and post-harvest effects on the N uptake of main crops and thistles, is one promising strategy for this control of C. arvense.

RowCrop was supported financially by the Green Development and Demonstration Program as part of the Organic RDD-2 programme, coordinated by the International Centre for Research in Organic Food Systems (ICROFS).