Soil organic carbon (SOC) in arable organic farming depends on inputs in crop residues, green manure, catch crops and animal manure. Changes in SOC of different organic and conventional farming systems were compared in a long-term experiment and related to estimated carbon inputs. About 10-20% of the estimated C inputs were retained in topsoil SOC over the experimental period.

A long-term experiment comparing a range of arable organic and conventional crop systems at three sites (Jyndevad, Foulum and Flakkebjerg) in Denmark was initiated in 1997. This allowed changes in soil organic carbon (SOC) to be compared across treatments and to estimated carbon inputs. The experimental treatments in the organic farming systems included use of whole-year green manure crops, catch crops and animal manure (as cattle, pig or digested slurry). Data on plant residues and animal manure were used to estimate C inputs to the soil. This was compared with measured changes in topsoil (0-25 cm) SOC content over 4 to 8 year periods. Mean C inputs and change in SOC contents are shown in the table below. 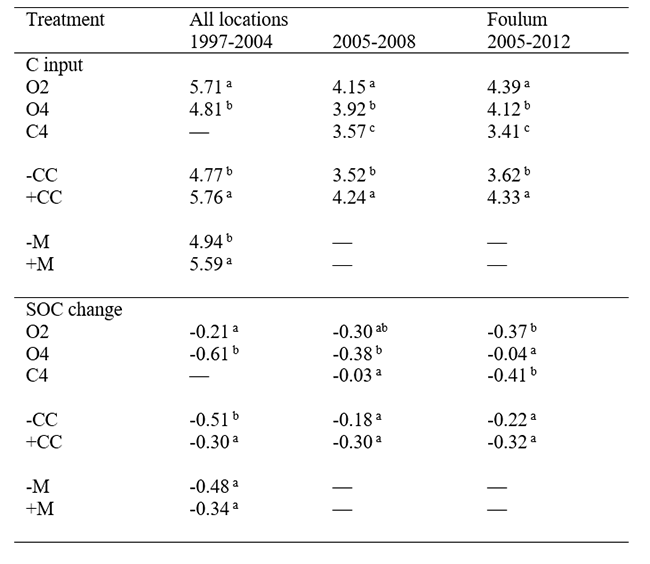 For each group (rotations, catch crops and manure respectively in separately C input and SOC change parts) mean values having different letters within a column are significantly different at the 5% significance level. O2 means organic rotations with perennial green manure, O4 means organic rotations and C4 means conventional rotations. +CC/-CC means with or without using catch crops and +M/-M means with or without applying manure.

Comparisons between organic and conventional farming

Is SOC mainly contributed by roots?

Regressions of changes in topsoil SOC against estimated C inputs showed that 10-20 % of C inputs were retained in topsoil SOC over the experimental period. There was no clear indication that belowground C input contributed more to SOC than aboveground C inputs. Despite consistently higher estimated C inputs in organic versus conventional systems, no consistent differences in measured SOC between the systems were detected.

The project ’Row cropping in organic arable farming for increased productivity and sustainability’ (RowCrop) is a part of the Organic RDD 2- programme, which is coordinated by ICROFS (International Centre for Research in Organic Food Systems). It has received grants from ’Grønt Udviklings- og Demonstrationsprogram (GUDP)’ under the Ministry of Environment and Food of Denmark.