Legume-based catch crops can replace a part of the animal manure used in organic rotations without elevating the N2O emissions substantially according to the research projects HighCrop and Legume Futures.

Legume-based catch crops (LBCCs) may be an important source of nitrogen (N) in organic crop rotations since they are capable of taking up N both from the soil and from the atmosphere via biological N fixation (BNF). Consequently, they may help improve the crop yield through enhancing soil fertility and crop N supply. On the other hand, the legume-based catch crops may also have a negative impact on the climate as they may enhance the emissions of nitrous oxide (N2O), which is a powerful greenhouse gas.

Therefore, the findings from two research projects HighCrop (Organic RDD 2) and Legume Future (EU-FP7) are promising, as they show that a higher level of N2O emission is not necessarily the consequence of growing LBCC.

As part of the two projects HighCrop and Legume Futures, we compared the effects of various catch crops on both the N2O emissions and the yields of the succeeding crop - organic spring barley - in a one-year field study. We also determined the biological N fixation in micro-plots in the fields with legume-based catch crops as well as the N2O evolution from incorporated catch crop residues in a laboratory study using 15N-labelling.

The legume-based catch crops accumulated significantly more N than non-legumes, and more than half of the N appeared to derive from biological N fixation. As a result, the barley yield increased markedly. The laboratory study showed a potential risk of elevated N2O emissions from the residues of the legumes, yet we did not observe greater annual emissions from legume-based catch crops in the field study. 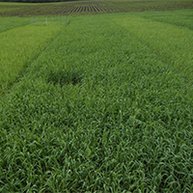 Organic crop production is often limited by inadequate nitrogen supply. Livestock manure is an important source of N, but many organic arable farms need to import this from conventional livestock farms. Alternative sources of N need to be considered in order to reduce the dependence on conventional manure imports.

Legume plants can add a significant amount of N to the cropping systems via biological N fixation, which may meet the crop N demand. Growing year-long green manure crops with N-fixing legumes as a main component is practiced on many organic farms. However, this is at the expense of growing a cash crop.

In contrast, legume-based catch crops grown between two cash crops, may be an appealing alternative to supply N compared to livestock manure or green manure.

On the other hand, the potential risk of increased N2O emissions from N-rich materials such as legumes, also needs to be evaluated, as N2O is a powerful greenhouse gas with a global warming potential 300 times higher than CO2 over a 100-year period.

Agricultural soil is one of the most important sources of N2O emissions, which is mainly produced during microbial processes of nitrification and denitrification. The N2O emissions from the soil are determined by the size of the N input and by the source of N, e.g., inorganic fertilisers or crop residues.